I am pleased to have Sharon Sant on my blog today. Her debut novel, Sky Song, is one of the great books in the Indie Giveaway and it could be yours! The second book in the series, The Young Moon, is soon to be released, so hurry up to read the first. But now, have a little taste of it and read what inspired Sharon to write the Sky Song Trilogy

An unknown past. An unwanted destiny. A fight for survival.
A strange-eyed boy with no memory of his true identity or real parents, Jacob could have no idea of the mortal danger he has been in every day of his fifteen years. Now that danger has found him and suddenly he doesn’t know who he can trust and what is real anymore. All he knows is that his new identity is almost as terrifying as the peril unleashing it has brought. Caught in the universal power struggle of an ancient race of beings and a destiny demanded of him that he does not want, he must fight to protect his own life and everyone he holds dear. But when the time comes, will he be strong enough to make the sacrifices that saving them will demand?

Sky Song – How a tiny idea can grow into a complete trilogy.

Sky Song started off as a younger children’s tale about a girl whose dad watched the skies every night for something. I don’t even remember now what sparked off the initial idea. Sometimes it can be a throwaway comment, a song lyric, a seemingly innocuous thing. Only the other day an idea came to me from a random comment made on Twitter!

The little girl in my story didn’t know what her father watched for, but it soon became clear to her that whatever it was, it didn’t belong to the world she was familiar with. As I thought about it, though, the idea seemed to morph independently, into something completely different. I started to think about what could come from the starry heavens. My first answer was aliens, but, for me, that was too obvious. Then I got to thinking about all the various belief systems that have stuck with humanity over the years of its evolution, and the one recurring theme was that the stars are linked with our destinies. But what sort of destiny could come from the sky? Cue aliens again! And what would you do if your destiny called but you didn’t want it? That’s the story at the heart of Sky Song. 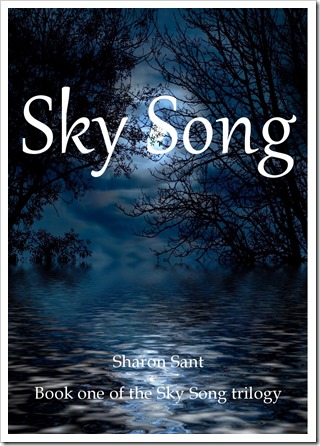 As I worked the story out in my head, the little girl became a fifteen-year-old boy named Jacob. Then came his friends and family. They had to be awesome, ties so strong that there would have to be a really compelling reason for him to accept his new life. So I built him a near-idyllic childhood and a perfect school record with amazing friends and devoted family. Then I made him fall in love before I dropped the bombshell. When you see a story begin to show its shape like this, it’s so exciting, and the story of Sky Song from there almost told itself. It’s at times like these when being an author rocks!

The tale became more and more complex and epic as writing progressed and pretty soon I knew there would have to be more than one book to tell it. So The Young Moon (release date March 8th 2013) followed, then Not of Our Sky shortly afterwards (release date TBC). I plan for the entire trilogy to be available by summer 2013.

To find out more you can catch up with me on my website: www.sharonsant.com or on Facebook: http://www.facebook.com/sharonjsant?ref=hl

Friend me on Goodreads: http://www.goodreads.com/author/show/6888220.Sharon_Sant