Pax, which is currently being edited by the extraordinaire Amy, is the second installation in The Ginecean Chronicles, so its cover should immediately convey a sense of belonging to the trilogy. At first, I thought to ask Alessandro to mirror the composition of The Priest’s cover in Pax. Instead of having half face on the right, Pax’s face would be on the left. As a background, I wanted a glimpse of Ginecea City. Although the result is beautiful, after seeing the first attempt I think Pax’s cover should follow The Priest’s exact layout and feeling, but in a different shade; something blue to symbolize the city, whereas in The Priest the sepia was chosen to symbolize the desert. Also, I asked him to display the portion of the city’s image containing the statue of the Goddess instead of the ruins. Any thoughts or suggestions? 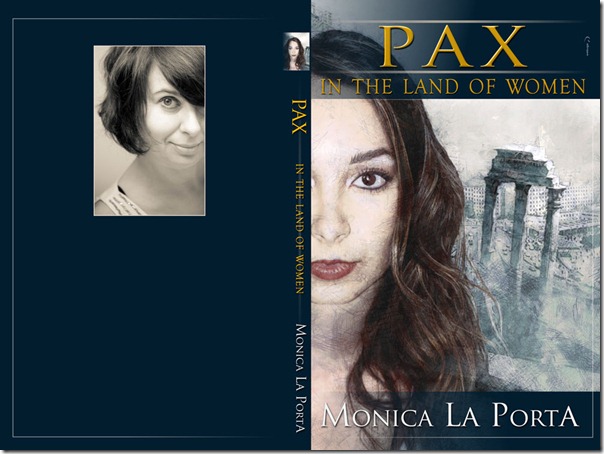 Pax in the Land of Women: Cover 1

Nero, my furry baby, has gone through a lot, but here he is by my side, on the couch. He’s only six years old and the sweetest beagle you can imagine. I write everyday while petting him; it gives me peace beyond comprehension and he makes me smile. Nero shadows me wherever I go, and, if he feels I’m upset he nudges his big, snoopy-like nose against my leg. Life is definitely better if a dog adopts you.

Beagles on a cover 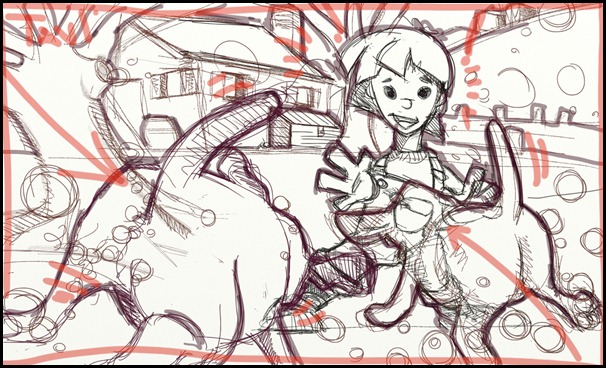 Last year, I wrote a short story about a boy and two beagles, and Alessandro, my favorite cover artist, worked on the concept art for a possible graphic novel based on it. This was the very first drawing for the cover. The project has been put on a hiatus for the time being, but Alessandro’s art deserved to be properly showcased.

Alessandro doesn’t sleep at night, which works great for me since he’s creating some serious art.  In the last two or three weeks, we went back and forth talking about what I wanted to be represented on the cover for Pax in the Land of Women. I asked for a mix of ancient ruins and modern buildings, and then I gave him free reins. Fresh from his tablet here is the concept for Ginecea City. Stunning, right? 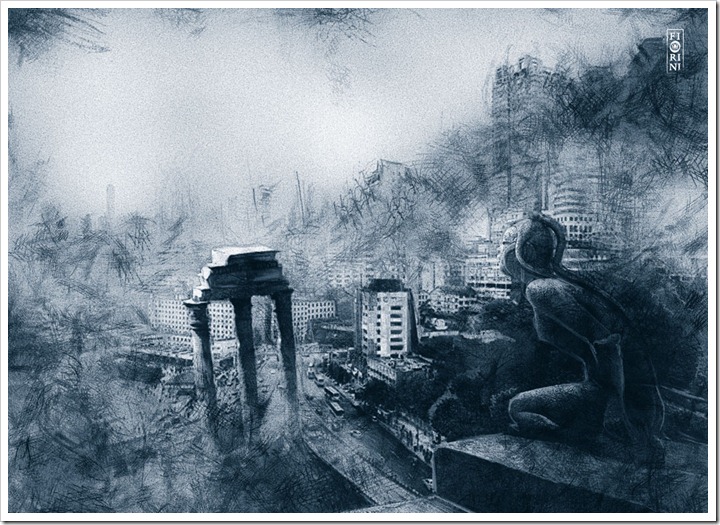 Alessandro Fiorini, the artist behind The Priest’s cover, is working on the concepts for Pax in the Land of Women, second installation in The Ginecean Chronicles. He sent me the first image a few hours ago, and, as usual, I was extremely happy with his work. What do you think? Isn’t he great? 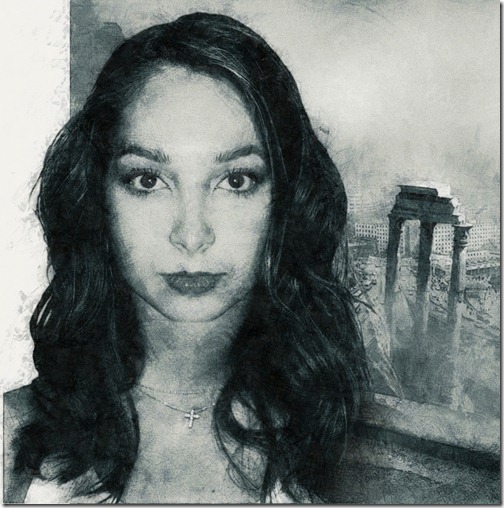 The Priest got its first review. And it’s like watching your kid walk his first timid step. A mix of trepidation and exhilaration. Hoping that he’ll run soon but afraid he’ll get hurt, and you know you won’t be there to help him. Will he be strong enough?

The sixth novel I’ve written, The Priest is the first I published and it took me almost fifteen months to go from writing the story to pushing the button to release it into the wild, vast world outside my pc. There were frustrating moments, it was a long gestation for mere 54k words, but I never thought to quit. Now, 271k words later, The Ginecean Chronicles are complete, but my work is not done, yet. The second and third in the series will be published only when I’m sure I’ve done everything in my power to make my creations stand for themselves. So that the other kids at the playground won’t mock my babies.

I have a thing for gnomes. It started when I was a little kid and my family used to go on vacation in Austria. We went for long walks in the forest and my mom told my sister and me whimsical stories about little people living under rocks or inside holes in the trees. Several years later, I laid eyes on Wil Huygen’s Gnomes and here they where: Mom’s little people.  Then, one day, looking for books about salt dough, I found the image of a tree house that reminded me of a gnome dwelling. By that time I had already adopted the more refined and durable cold porcelain (cornstarch dough) instead of the salt dough. It took me several months to finish the two tree houses, as I kept adding details until I decided it was time for the gnomes to come visiting. 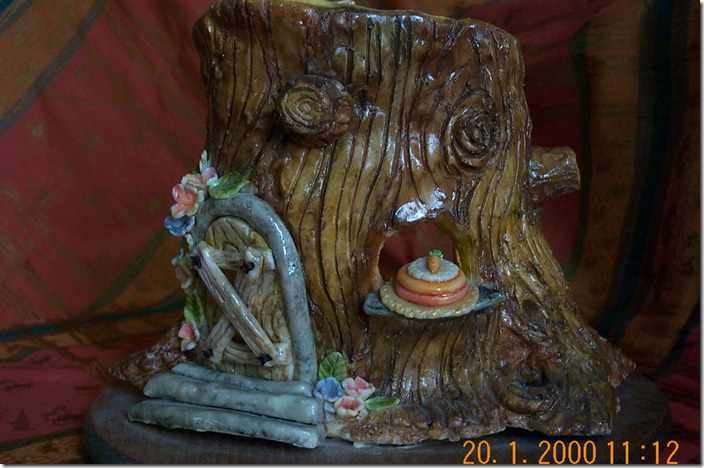 Marketing the book you wrote can be a daunting experience. It is for me. But when nobody knows you and your presence on social networks is scarce, you must talk about it, somehow. So, I spent the whole day Sunday studying how to push my book without pushing it and, most importantly,  how to avoid becoming the friend who wrote a book and nobody wants to frequent anymore. After a discreet amount of frowning, sighing, and downright swearing in Italian, I reached the conclusion that word of mouth, someone else’s mouth, not mine, it’s my only hope. But, to be realistic, I’ve also decided that, after all, one day a week will be devoted to market my book. This is where I started. And, I must admit, I had fun in writing that piece. This is another place, Kindle Board, where I can promote my work. Only time will tell what works and what not. For now, I’m simply trying to reach out.

Talking about The Priest

It’s not a mystery I’m a great fan of anything related to the great state of Washington, but today I feel even prouder than usual. What a gift for couples who love each others, and just before Valentine’s Day. It isn’t a coincidence that Mauricio and Rosie’s tale was written here, one of the most open minded places in the States. I’m glad I’m raising my kids in such a nurturing environment. Love is love. Always.

Proud to Be a Washingtonian!

Just an image, but it means a lot to me.

The Priest’s Hall of Fame

The Priest is alive!  And, after so many rocks in its path, it’s hard to believe that this little book has found its way out of my pc. Two years ago, while I was writing Pax in the Land of Women, two characters popped to life. Mauricio and Rosie had a great story to tell, but there wasn’t any space in Pax for them. When Nanowrimo 2010 came along, I thought it was the perfect excuse to take some time off from Pax and write Mauricio’s tale of slavery and forbidden love. Now, a week after  pressing the publishing button, I finally can write about it. At first, I was too dazed to even think of anything coherent to say. Now, I still can’t muster anything smart, other than the fact that seeing my little creation out there it’s a rewarding feeling. Long and difficult process, but worth every moment of it.

Mauricio is a slave. Like any man born on Ginecea, he is but a number for the pure breed women who rule over him with cruel hands. Imprisoned inside the Temple since birth, Mauricio has never been outside, never felt the warmth of the sun on his skin. He lives a life devoid of hopes and desires. Then one day, he hears Rosie sing. He risks everything for one look at her and his life is changed, forever. An impossible friendship blossoms into affection deemed sinful and perverted in a society where the only rightful union is between women. Love is born where only hate has roots and leads Mauricio to uncover a truth that could destroy Ginecea.