I’m always impressed by the amount of work that goes into creating a successful cover. Angela Roquet is here today to talk about the making of her covers. For a chance to win her urban fantasy novel Graveyard Shift  enter the great Indie Giveaway. 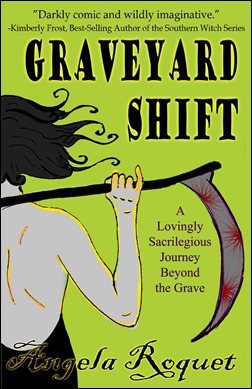 I still have a day job as a graphic designer, so that experience came in handy when I designed my covers. Of course, the covers I usually design are for real estate guide books. I used photoshop for all of them, and I decided from the beginning that I wanted to use really vibrant, bright colors to draw the eye. The first cover is green, and the image is one that I drew by hand and scanned in. It’s a picture of Lana, my main character, from the backside, holding her scythe over her shoulder. I sharpened the image in photoshop and injected some color. Then I used a few fun yet legible fonts to add the title and my name. I used

some beveling and shadowing features to enhance the text. I used a more basic font for the cover blurb and subtext. The cover for book two is purple. I took a photo of a boot and applied some artist brush effects to make it look more like a cartoon, and I used the same special brush tool to add the red blood splotches that I used on the scythe for the first book cover. I threw a few daisies in the background to tie-in with the title. The third book cover is a sky blue. I used the silhouette of a crow and added the red blood splotches again. I really like how it turned out. I think keeping it bold and simple is key when it comes to covers.

Urban Fantasy Author Angela Roquet is a great big weirdo. She collects Danger Girl comic books, owls, skulls, and random craft supplies. She no longer collects paperback books, because she can’t fit any more in her office, however she does collect ebooks. She has an unhealthy obsession with television shows created by Joss Whedon and fantasizes about him directing television or film versions of her novels. Angela’s favorite book/movie is The Wizard of Oz. She likes a little coffee in her cream, and her favorite food is sushi, even though it’s takes her FOREVER to make. Angela is a peace loving, tree hugging hippy who tries to buy organic and local as often as possible. She’s a fan of renewable energy sources, marriage equality, and religious tolerance. As long as whatever you’re doing isn’t hurting anyone, she’s a fan of you, too. Angela lives in Sedalia, Missouri with her husband and son. When she’s not swearing at the keyboard, she enjoys painting, goofing off with her family and friends, and reading books that raise eyebrows. You can find Angela online at http://www.angelaroquet.com

Angela’s first two novels GRAVEYARD SHIFT & POCKET FULL OF POSIES are now available in select stores and on Amazon.com in print and for the Kindle!

Behind the Scenes of Angela Roquet’s Covers