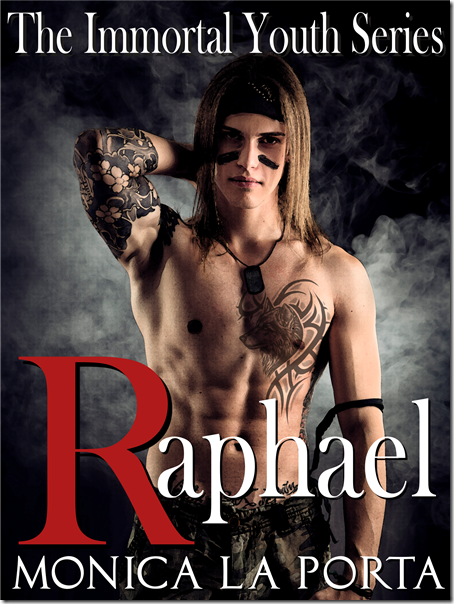 I’ve been working on Raphael’s edits like there’s no tomorrow and promptly forgotten all about Friday Snippets and other promises I made. But, here I am, the next day, with a brand new snippet, and the simplified version of the cover I posted last week.

Slowly getting up, Raphael stretched his arms and looked around, only to spot the colossal frame of the Controller. “Great Wolf—”

The demon had his back to him, talking on a cell phone. Of all the places the man could be stalking in Rome, he had to be walking around Quartiere Coppedè.

“Happy sweet sixteen to me.” Raphael was sure there was a cosmic joke somewhere to be found, but was too hard-pressed to appreciate the humor in his current predicament.

Forcing himself to slow his pace, he stepped away from the fountain and reached the side of the Fairy House, now in the shadow. His heart throbbed in his throat as he cleared the corner and kept walking toward the bridged archway delimiting the neighborhood. A red bus slowed down and stopped at the curb on Tagliamento Street. With a leisure jog, he passed the arch and reached the bus stop, then hopped on the running board as soon as the bus exit doors opened.

Passengers stepping out complained, but Raphael pushed through the crowd until he was safely ensconced in the middle of the cabin, sandwiched between the afternoon commuters. He dared one peep out of the large window and saw the Controller staring at him. The man shook his head with a pronounced grimace on his face. As the bus lurched forward, Raphael waved at the demon. “See ya.”

Then a sweet scent he had never forgotten hit his nostrils and he turned, his heart beating as fast as his wolf’ as he faced a familiar pair of green eyes. A feeling of belonging descended upon him like a warm blanket.

“Hi,” the girl of his dreams said.

Two years had passed since the night of the botched robbery, but he thought of her every day. “You’re my mate and I’m in love with you,” he hurried to say, in case she would disappear again. It had been love at first scent for him, and he had known the truth since then that he would never love anyone else in his life. His wolf pranced around to be acknowledged.

Her eyebrows shot up and her lips curved in an amused smile revealing dimples on her cheeks. “It’s nice to see you.”

“You’re so beautiful,” he whispered. His wolf demanded he nuzzled her throat, and Raphael’s breath hitched at the image.

At the same time, the girl’s eyes lit and widened, casting a spell on Raphael who couldn’t see anything else but her.

Saturday Snippet, just because editing is a tyrant