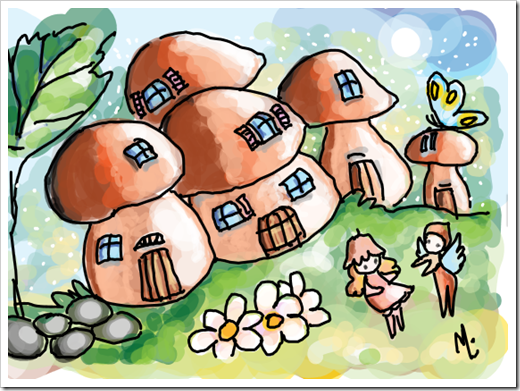 Outside, foggy and cold. Inside, two cups of espresso already consumed and a tea on the way; Painter doesn’t want to work; Artrage requested one more time a registrations key to start; my neck is aching; my patience is dwindling. Plus, I hate complaining.

But, my dad is coming to visit and that makes everything better.

Summary of the week:

One of my didlr paintings, the fairy tale drawing above, was featured on the main didlr page. If nothing else works, that’s plan B through Z—drawing on a touch screen that is.

Gaia’s cover is being made as I write. Elios is in the editor’s hands again. Marie’s Journey’s first edit is done and it is in my court now. I wrote the blurbs for both Gaia and Elios.

I ventured outside in the mist and the rain, and walked every day with Nero while reading three new books.  I think that’s it.

Zena didn’t hesitate to answer. “Yes, I was here.” She took one chair by the armrest and went to sit close to the window. “I was in my twenties when the Massacre happened.”

“Did you lose anybody?” Marie asked. This time, she knew she shouldn’t have asked.

But Zena surprised her once more by answering. “I did. We were in love and we were planning on adopting a kid. She was at the wrong place at the wrong time and took a bullet not meant for her.”

Rane, who had been warming some water at the little portable stove, came back carrying three steaming cups by the handles. “The soldiers shot on the crowd?”

The nurse’s mouth thinned and her eyes went dark. “Yes, they did, but the bullet that killed Bianca was mine.”

The nurse’s words left both Rane and Marie speechless.

Zena raised her cup to the ceiling. “Cheers to Ginecea’s fall. If I’m lucky, I’ll still be alive when it happens.”

A few minutes of silence passed, none in the room able to say anything. The nurse finally broke the spell. “I had it easy. You can’t imagine what they did to the heterosexual couples.”