On Saturday, April 9th, year of the Lord 2016, I finally got a Bookbub promotion. After submitting once a month for a few months, someone took pity on me and decided to give me a chance with The Lost Centurion (The Immortals Book 1)

. Vivid dreams of fame and glory filled my mind as I promptly paypaled them my fee for entering indie author Valhalla. For two weeks, I agonized about all the changes I had to make on all the books I’ve published so far. New newsletter webforms were created for the occasion. No words were written whatsoever. The book that should’ve been halfway finished has been forgotten. Spring has come. The much anticipated day comes as well… and Amazon decides that’s the day it won’t be refreshing ranks until late in the evening. For several hours, The Lost Centurion is stuck at #1500, when it should have been between #5 and #10 on Free Kindle Store. When its true rank finally shows, the book it’s at #6, but it’s also the middle of the night on the East Coast, so it missed all the visibility a whole day would have granted. Let’s say that a few chosen words were uttered during Saturday and that I considered taking on a new hobby: drinking. Fortunately, The Lost Centurion is still on the first page of Free Kindle Store, sitting now at #13. I’m still sober.

My First Bookbub: The Lost Centurion & The Promo that Almost wasn’t… 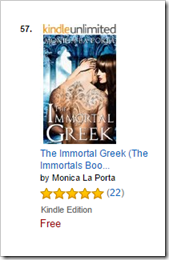 Hi, everyone! In case you don’t receive my newsletter, I would like to personally thank you for making my last free run the most successful ever. Shy of 10.000 copies, The Immortal Greek has been downloaded all over the world and it’s now at #57 on Amazon Free Best Sellers list. Thank you!!! Please, keep sharing my promo to help me finish the last day of this already epic free run with a bang!

Merry Christmas and the happiest New Year to all of you!

An Immortal Christmas, a novella

Once upon a time in Spain, Constantine was madly in love with Camelia. It didn’t matter to him that he belonged to an elitist werewolf clan and their union was doomed from the start. He was just content to be with her.

Then one sad day, Camelia left Constantine to marry an Italian werewolf. Shunned by his family and crazy with grief, he asked a warlock to put a spell on him. The request was simple. Constantine wanted his soulmate’s bonds to be revoked. The price was astronomical. If he and his ex-lover would ever be close again, he would die by the next full moon. So, he put an ocean of distance between them and moved to Seattle.

Only, Camelia is in Seattle, and the full moon is on Christmas, the next day…

Will the power of love heal ancient wounds and save Constantine’s life?

An Immortal Christmas: The Immortals Book 9

Hi, everyone! If you read any of my novels and you liked them, would you add one of my 2015 titles to the Goodreads Choice Awards 2015? Right now, An Immortal Valentine’s Day, Raphael, and The Lonely wolf are eligible. Example on how to vote below. Thank you!!!