A friend of mine, C. B., is a wonderful artist. A few days ago, she posted on Facebook her latest painting, a colorful village by the sea, and I was inspired by it. Earlier this morning, still jetlagged, I opened Fresh Paint and created this piece. 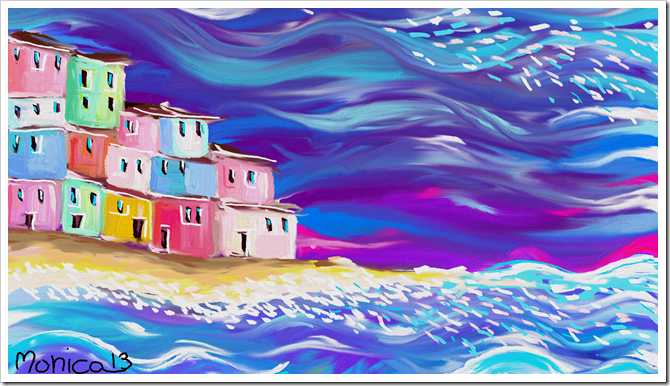 Catch of the Day

Okay, it should be Monday Drawing #18, but I’m working hard on my novels and time flies without my consent. Recently, Fresh Paint announced a new feature, watercolors! Only available for windows 8.1 preview users, I seized my hubby’s laptop and had my sweet way with the new app. This is the result of several hours of great delight.

Poppies in the Sky 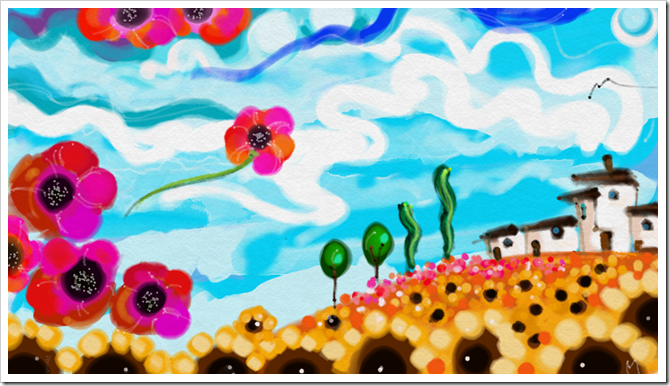 Sunny. Sunny. Sunny. That’s it. Enough reasons to put together my resurrected Monday Drawing ad the Friday Snippet in the same post. My tan allows me special powers. Also this is my blog.

Nothing to add on the rewriting/editing front. Same as last week.

From Elios, which is slowly taking shape:

Areel paused a moment and lowered his head. “Soon, we’ll be reunited.”

“I can’t help but wonder about the softness of her skin and the pleasure we would have experienced with the briefest sharing of our thoughts.”

Areel gasped and for a moment his image faltered. “But you haven’t attempted a Share with her? You told me you hadn’t—”

“I’m the epitome of the perfect Observer.” I looked at him and shrugged. “Never touched her. Never kissed her.”

“Good. That’s good. Because you know what would have happened to her if you had.”

I raised one hand to stop him from spelling it out for me. Every Observer knew the rules and I didn’t want to talk about scraping her mind clean of my memories.

But Areel keep talking. “She could lose her mind through the process.”

“I know.” The procedure was the equivalent of a sophisticated lobotomy.

“You know the exposure to us changes the subject’s DNA—”

“Then you also remember that the subject transfers Solean DNA in their genes and passes the memories of us to the next generation, and then the next, changing both their history and ours.”

“I remember!” I finally shouted, but Areel wasn’t done yet.

“There are too many implications in having a superior knowledge way ahead of time. Especially for a violent society like the humans.”

I was furious with him, but I composed my voice and repeated, “I did not touch her.”

“I trust you.” He sounded apologetic and before I could ask what was all that about, he whispered, “It makes everything easier.”

Long time due. I woke up at 4:45 am and decided it was the right time to give Corel Painter another chance. Good news: now I know it’s not the coffee the reason why I don’t sleep. Bad news: I still don’t know why I don’t sleep. 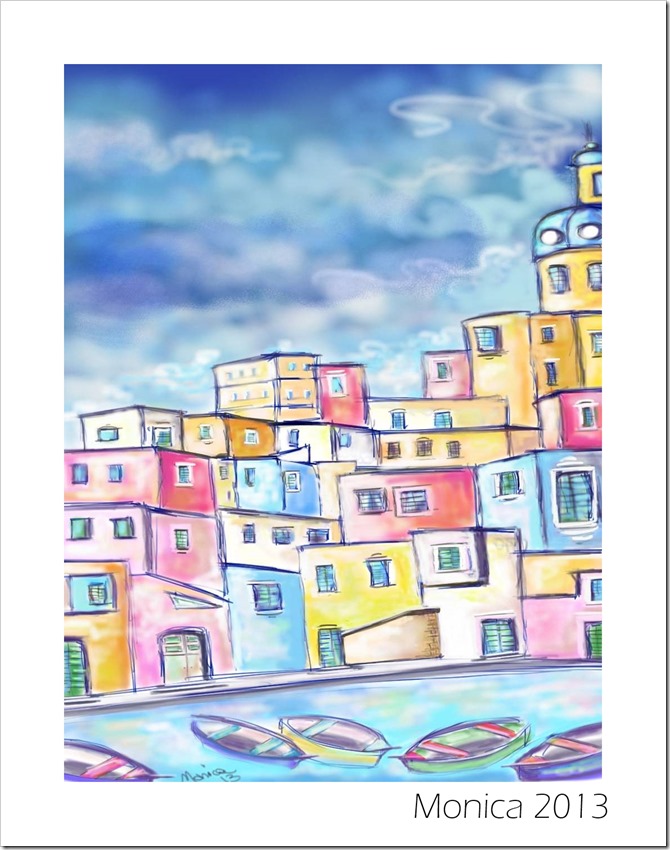 Another Try with Corel Painter

I started this drawing yesterday, but it wasn’t as psychedelic as it turned out to be after  I went into a color-frenzy today. I did have some spicy Indian food for lunch. Coincidence?

Alessandro Fiorini and I have thought of starting something called Monday Drawings. It’s our way to stay focused  and post at least one drawing a week. In truth, Alessandro doesn’t need any reminder to put his Wacom tablet to good use, but I do. Monday Drawings is open to anybody who wants to join the club.